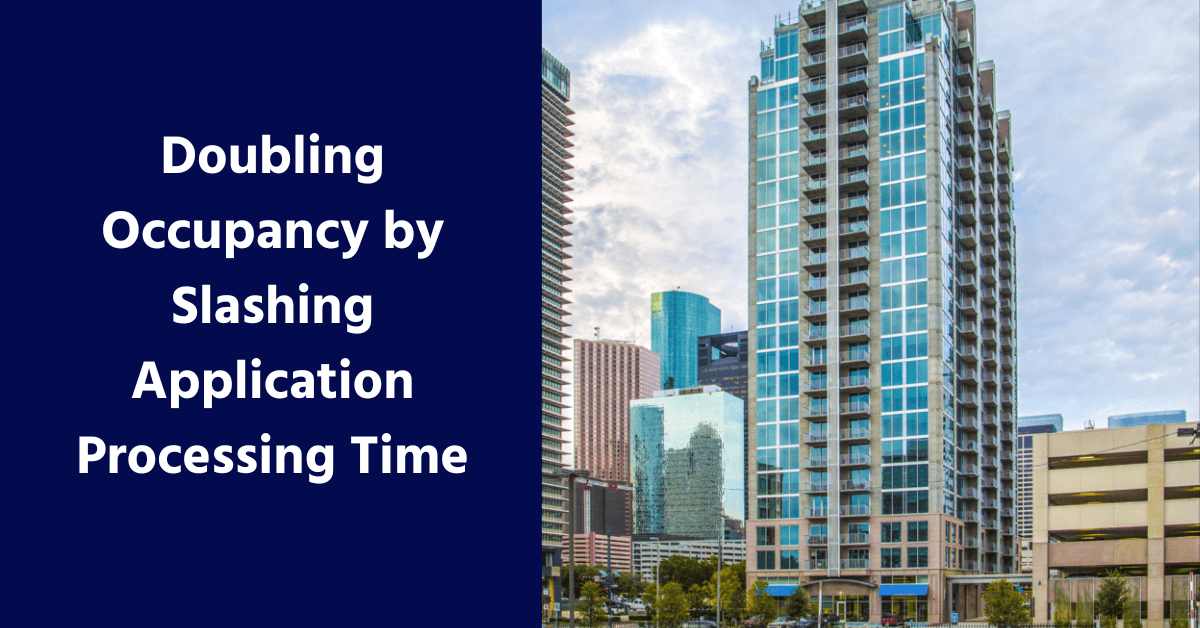 When taking responsibility for a property with 42% occupancy, focus and automation are everything. When Mary Magness moved to this newly managed property in Houston, she knew that current business practices were inadequate. “I have six people managing nearly 700 units in two towers”,said Mary Magness, Community Manager. “Doubling my occupancy in a year would be impossible if I had the team chasing down pay stubs to verify income.”Automating income verification accelerates processing standard applications but even more value becomes apparent with more complicated applicant scenarios. Frequent complications faced by Mary’s team include:

Because of our proximity to the University, said Mary, “we often see students apply as a group.” As a standard feature, Payscore, supports the application of non-familial groups of renters. The report simplifies the decision process by clearly identifying the financial stability of both the individual applicants and the group together. In one case, a pay stub analysis would have approved the group. With Payscore, Mary’s team was able to see that the income of one applicant was sporadic. The applicant’s pay stubs suggested approval, but the 12-months history provided by Payscore suggested deeper inspection was warranted. With the detailed report pointing to further discussion, declining the application became the proper course,saving the trouble and expense of a highly probable eviction. Mary’s team was comfortable with the decision to decline because, in her words, “… we had the numbers to back things up.”

Applicants compensated on commission offer unique challenges. A process relying on recent paystubs might dramatically underestimate income. In one case,a recent applicant with commission-based income shared paystubs showing a net income of zero. On this basis, the application would historically have been rejected. Instead, Payscore’s report evaluates income for a year and captured her episodic but substantial commission payments. The detail of the report helped assure the applicant was treated fairly.

Similarly, people with variable or non-traditional wages often present a complicated income picture. They might have one job with a W2 or a paystub. But what if a large percentage of their income is tip-based? What if they have a side hustle that pays cash, Venmo, or cash cards? Only Payscore’s ability to use its artificial intelligence engine to detect and identify income ensures that new home renters are treated fairly, without subjectivity,and similarly to all other applicants without requiring intellectual overhead from the management team.

A similar challenge has been the explosion of self-employed entrepreneurs. People in this category present several challenges. First, rarely will they have a traditional form of income documentation. If they are truly self-employed, there is no notion of a pay stub and verifying income becomes tedious and highly subjective. Moreover, business and personal bank accounts often become intertwined, further complicating the evaluation process. Instead,Payscore provides clarity between accounts and automatically identifies the income insight required to fairly place residents. Seeing the detail over a longer period helps match applicants to properties more objectively.

In some cases, the details behind income claims are critical. In one case, there was an applicant who probably would have been approved without Payscore. Nor would they have been flagged by other vendor’s artificial intelligence scanners looking for fraudulent pay stubs. In this case, the pay stubs were real but out of date. Payscore identified a gap in the pay period. This flagged the team to dig deeper and, when asked for additional verification, the applicant declined, leaving no option but to deny the application.

"We describe Payscore to applicants during the walk-through", said Mary Magness. "People intent on fraud usually leave at that point."

By her own estimate, Mary’s utilization of automated income verification from Payscore reduced her team’s processing time by up to 50%. She also found that having a standard report helps foster and accelerate the deeper discussions often required when evaluating more complicated cases. The additional detail serves as a mutually beneficial filter: her team finds the right resident for a property but also helps match the best available property to an applicant. In the end, decisions are happening faster and with more confidence than before.

Ready for
the next level?